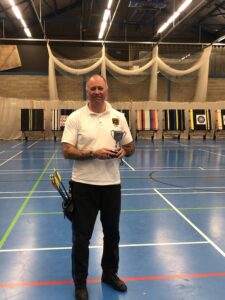 He won this by competing as part of the County Team on 3rd October last year and achieved the highest scoring barebow round in the winning team. Congraulations Mick.

Susan General Club News November 19, 2021November 19, 2021
An unseasonably warm evening for the Halloween ping shoot this year saw 18 archers plus spectators arrive at Sywell in the pitch dark to take part. Four targets were laid flat on the ground and illuminated pumpkins were set on the gold of each one.
The rules were, as usual, made up more or less as we went along. This year they ended up as normal five zone scoring with a direct hit of a pumpkin counting as 10. Random ghosts witches and pumpkins were scattered on the ground between the targets also counting as 10. Grass counted as zero. Targets were about 30-40 yards from the shooting line.
It was a very starry night so we had plenty of reference points for aiming. To level the playing field even more between experienced archers and beginners glow sticks were attached to all arrows to completely remove ballistic integrity.
Most arrows, as usual, scored zero. Only twenty arrows actually landed on the targets all evening. Not a single pumpkin, witch or ghost got injured in the process, although several pumpkins did have lucky escapes.
After a break for drinks and snacks we returned to the field to shoot a volley:  All archers shooting in unison to voice commands. This didn’t make any difference to the final scores, and resulted in only one additional archer (George) actually hitting anything.
Prizes were awarded as follows.
Junior Lady: Hazel Dalley
Junior Gent: Toby MacFarland
Senior lady: Karen Wilkins
Senior Gent: Paul Hopkins (That wasn’t the highest score but everyone thought I must have cheated)
Thanks to everyone who helped set up and pack away afterwards and especially to Lou for the photos & refreshments and George (Genny) Bond for keeping the lights on – well, most of the time.

It has been great to see our club back at John Ashby Sports Hall following the start of the pandemic. I was unable to make the two Saturdays, but joined in for the first session on Saturday 23rd November. 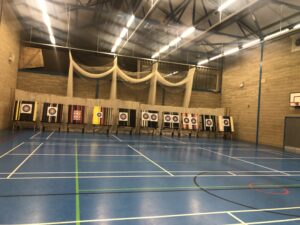 I was greated by warm faces, everyone seemed to be happy to be able to shoot inside. We had a mix of those who had recently finished their beginners courses, members who haven’t shot for a long time and our seasoned members – all helping out where it was needed.

Getting the hall set up is always a challenge for us to be able to start shooting at the advertised time of 9.15am, especially now we have a much shorter time to shoot in, so we welcome members to join us for 8.45am to begin this.

We look forward to seing more of you on a Saturday through the winter.

Lisa Owen was last week presented with her certificate and badge for taking part and coming first in the Short Metric 2 round as part of the inter county postal match between Northamptonshire and Bedfordshire. 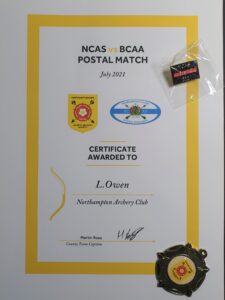 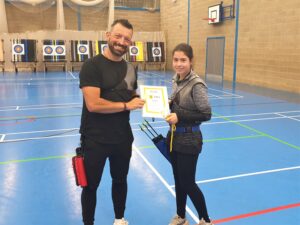 Lisa’s shooting has come on leaps and bounds over the last year, congratulations.

Usually the two counties have a in person match, but due to covid it was decided that we would do a postal match whereby any archer in the two counties can shoot the specified rounds and submit their scores.

The event was a great success with a total of 80 scores submitted across 5 bow style categories. In the same event Susan Corless took the highest compound score and Mick Lovell was second in the barebow category (by a mere 4 points).

Northamptonshire took the overall match win by 941 points – congratulations to the whole squad. The full results can be found here.

On Sunday 3rd October the County squad were out in action again, this time joined by NAC’s Mick Lovell shooting barebow. The County match was a three way challenge, between Northamptonshire, Buckinghamshire and Bedfordshire hosted by Buckinghamshire at Silver Arrow Archery Club.

The team shot Western rounds and I hear that it was a very bluistery day but the team shone through and Northamptonshire took the overall win! Congratulations to Mick & the whole team.

You can find the full results here.

Saturday 2nd October was the final session of our most recent beginners course. The day was a very damp one, but this didn’t dampen the spirits! These photos tell a great story, and we are very lucky to have a shelter to shoot from under.

There are many moving parts that go into making a beginners course happen – from enrolling the beginners on to a course once dates have been set & agreed, collecting the money, arranging coaches and supporting archers. But that’s not all! There is also the equipment preparation before hand to ensure the bows are ready for use, setting up and packing away the targets and ensuring the supplies of tea & coffee are flowing (especially on a cold and wet day!). Finally and no means least each and every one of our members at Sywell making our beginners feel welcome to NAC!

Thank you & we hope to see them joining the club soon! 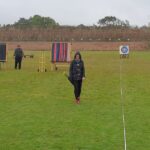 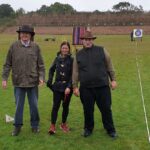 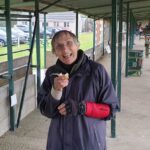 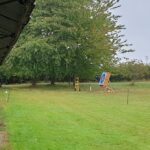 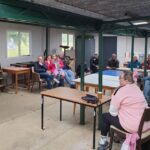