Susan recently headed to Lilleshall to compete for the title at the UK Masters which is an invitational event that you have to qualify for by achieving Master Bowman or Grand Master Bowman classifications. This event is usually held on the first weekend of June, however it was decided that extra time would be allowed to qualify due to Covid-19. The title is awarded to the archers who come out top over three separate elements to the weekend. 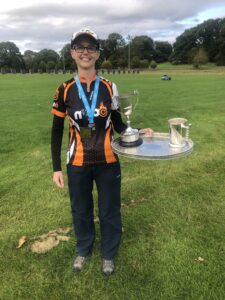 On the Saturday archers shot a WA1440 round, Susan shot an overall PB, and distance PBs at 70m and 60m and placing her in 3rd for Day 1. We had really great weather for the Saturday, which is a blessing at Lilleshall.

On the Sunday the wind has returned to its home at Lilleshall, and archers shot a WA50 round in the morning where Susan came 2nd, taking her to the head 2 heads in a strong position. In the head 2 heads Susan had a bye in the first pass taking her into the quarter finals where she took the win by a single point. She also took the win by 3 points in the semi-finals, taking her into the gold medal match, and she took that by a single point, placing her in 1st place for this element.

Overall this placed Susan first for the whole event, taking home the title of UK Masters Champion, as well as winning overall distance award for the 60m section of Saturday and part of the winning regional compound team.