Congratulations to Susan Corless who brings home a silver medal from Stage 4 of the World Cup in Berlin. The ladies compound team, comprised of Susan Corless, Ella Gibson and Sarah Moon who before this week hadn’t shot together as a team.

After tough conditions they qualified in third place and defeated New Zealand 230-217 and Germany 227-221 to book a title showdown with Turkey. It was a hard-fought match but Yesim Bostan, Gizem Elmaagacli and Ipek Tomruk gradually edged ahead to secure gold with a 232-221 win. 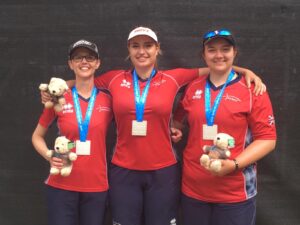 Individually Susan qualified in 28th place out of 42. Taking her into 1/24 match play. Winning this first match against Jennifer Wenzl of Germany, then in the 1/16 winning 143-140 against Tanja Jensen. She was unable to defeat New Zealand’s Elizabeth Randle with 141 to her 143.

This was Susan’s second World Cup event and not only her first International medal but also the first time she had won an international head 2 head match.

There was more success for the British compound team in the mixed team event, Ella Gibson and James Mason took gold after an incredibly strong finals match!

Congratulations to the whole team.